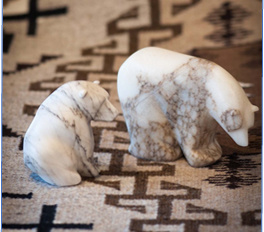 Michael Connor was born in Wiesbaden, Germany in 1958. His mother is of Nordic and German decent and his father is descended from two tribes of the Ojibwa Chippewa people of the St. Croix and Fon du Lac territory near Danbury, Wisconsin. In the early 1980s he answered an ad from a jeweler for a mechanic. While waiting for the boss he found the wax table used for jewelry making. One thing led to another and he finished a beautiful wax ring. The boss hired him on the spot to design and make jewelry for the store. By the late 1980s, Connor found himself in Santa Fe working for sculptor Jon De Celles. At this point Connor began to feel that he was being guided on a path; that he had a knack for working in stone.  Today, his beautiful alabaster bears are in more than 75 countries. 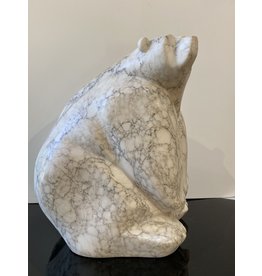